This list is from Kaelen Wilson-Goldie, writing in the Daily Star (Beirut), on Dec. 29. The DJ Spooky mix is terrific, and you can download it for free here. In fact, it's mostly African music, with a bit of North African. The Jajouka-Abdel Nasser-Umm Kulthoum segment is particularly fun. I love Nass al-Ghiwane, but I've not heard their new one. I'm familiar with but not wild about Rabih Abu-Khalil, and I've seen Rami Khalife perform with his father Marcel, and heard a couple interesting cuts by him. As for Bikya, you can listen to four of their tracks on their myspace page, and if you've got a myspace account, you can download two of them. I've not listened enough to evaluate them. The other stuff, I've not heard of. Track it down and tell me about it!

Though he is best known for spinning records, DJ Spooky That Subliminal Kid started out in the art world and continues to create inventive, cross-disciplinary hybrids that find him wearing the hats of artist, writer and theorist as often as that of the DJ. For the first-ever African pavilion at this summer's Venice Biennale, organized around an exhibition entitled "Luanda Pop," DJ Spooky mined music from across the continent for a seamless, 1-hour, 19-minute and 19-second mix. Masterfully meshed and interlaced selections include Tunisian hip-hop outfit Lotfi Double Kanon and a mind-blowing transition that begins with Morocco's Master Musicians of Jajouka featuring Talvin Singh and mixed with Gamal Abdel-Nasser's "Independence Forever" speech, segues through Duke Ellington's "Afro-Eurasian Eclipse" and end up with a heavy, drum 'n' bass remix of Umm Kulthoum's "Hob Eih." A prodigious adherent of world music in its most contemporary, urban incarnations, DJ Spooky is closely tracking the development of hip hop in the region and has lined up a track featuring Palestinian rappers DAM for his next album.

The independent record label 100 Copies in Cairo may be the single most exciting experimental musical outfit in the region, and it only got better in 2007 with the release of the first album from Bikya. The group consists of label founder Mahmoud Refat on drums and electronics, Mahmoud Waly on bass and electronics and Maurice Louca on guitar, keyboard and sampler. Their first, untitled album features eight tracks and the first, "Betrayal," is as masterful as Massive Attack circa "Blue Lines." The group performed in Beirut last month at Basement as part of the Meeting Points 5 contemporary arts festival.

Lebanese oud player and composer Rabih Abou-Khalil released his 19th album this year, the mournful, seven-track sequence that is "Songs for Sad Women." Framing the haunting sound of Gevorg Dabaghyan's duduk, a 3,000-year-old Armenian instrument that sounds like an oboe and looks like a clarinet, Abou-Khalil's latest adds to his impressive eclecticism.

Rami Khalife, 25, is nothing if not wonderfully precocious. His third album to date - after "Live in Beirut" and "Scene from Hellek" - is his first recording with an orchestra and features compositions by Prokofiev and Abdallah al-Masri."

The first two albums in a trilogy, "34 Days" and "Black Tuesday" attest to the singular talent of Jawad Nawfal, aka Munma, a name that he refers to as his "resistance moniker." The sounds here are, by turns, beautiful, disturbing, enigmatic and abstract.

She's an artist, actress and classically-trained pianist. Joanna Andraos is, piece-by-piece, constructing an entire creative universe around her multidisciplinary efforts. "Khimaira" takes some of the structures, movements and lines of classical music and pushes them into ghostly territory. The results are spare and lush at once.

Syrian-Armenian singer Lena Chamamyan's "Shamat" is an album of old folk songs salvaged from obscurity and rearranged with the help of Basel Rajoub, who plays saxophone and trumpet. 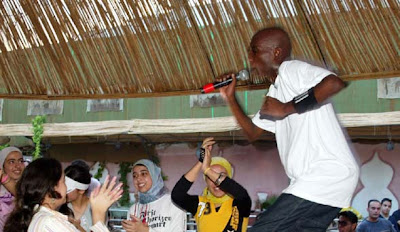 This is one of many articles on Palestinian rap, from 2005, but what really struck me was the photo, of one of the rappers from the Gaza rap group R.F.M., in performance.
Posted by Ted Swedenburg at 10:36 PM 1 comment: 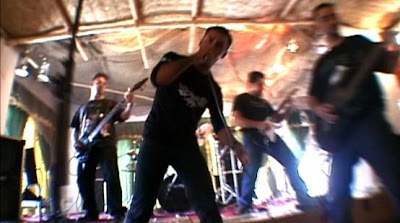 Here's the latest from the BBC on Iraqi heavy metal band Acrassicauda, until recently in exile in Syria, now in Turkey.

It's quite interesting how much coverage this band has received. No doubt it's largely the novelty factor.

There is a new film about Acrassicauda, called Heavy Metal in Baghdad. Check out the preview (and more information) here. The film premiered at the Toronto Film Festival last month.

Go here to listen to an NPR report (June 5, 2007--fortieth anniversary of the June War!). The Wall Street Journal covered the band in August 2004--read an excerpt here.
Posted by Ted Swedenburg at 1:40 PM No comments: